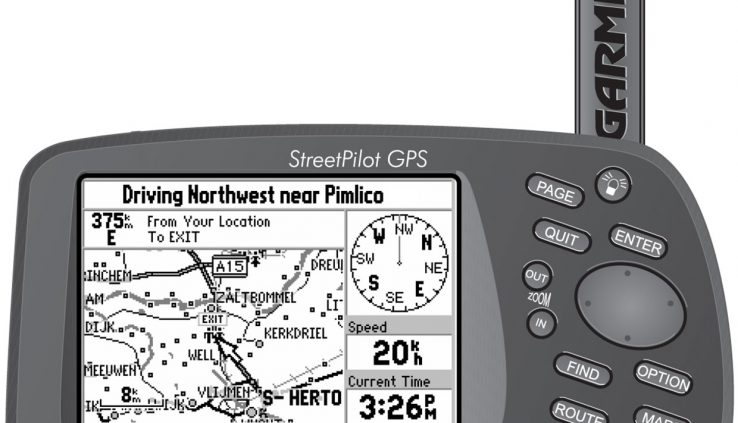 The Garmin StreetPilot helped destroy the market for street atlases, but it might have saved a few marriages in the process.

Do you remember unfolding a paper map to help you find your destination? The Garmin StreetPilot was the first navigation system to provide satellite mapping. Read more about the technology that changed the future of travel, featured in the #IEEE Spectrum Consumer Electronics Hall of Fame. http://bit.ly/2JSY0ar

The Way Forward: Introduced in 1998 and priced at US $400, the Garmin StreetPilot was one of the first practical and affordable GPS-based road navigation devices.

If you were born before 1980, there was a widespread expectation that you would learn how to read a road map sometime in your late teens. If you didn’t know how to get where you were going before you got behind the wheel of a car, you weren’t going to get there.

There were some exceptions. If you didn’t know how to get where you were going, you could always stop along the way and ask for directions. Alternatively, if you had someone riding in the passenger seat, you could always prevail upon her to do map duty.

Nevertheless, marriages sometimes ended because those conditions could not always be met. After Garmin? Not so much. Garmin and its competitors also darn near wiped out the market for road atlases.

The road to such sweeping social change began at the U.S. Department of Defense. In the early 1970s, the DoD began creating the Global Positioning System (GPS) but reserved use for itself until 1983. That year, the federal government made it available for consumer applications—albeit with degraded resolution. In 1996 the United States designated GPS a dual-use technology; as a practical matter that meant commercial manufacturers would finally get the same, higher-resolution readings as government agencies and the military.

Various manufacturers began making GPS systems for the commercial navigation market starting in the late 1980s, but between the reduced resolution available then and the initially high cost of the technology, they didn’t exactly fly off store shelves. For example, Magellan Navigation introduced the first handheld commercial GPS navigator, the NAV 1000, in 1989. Those units were appreciated by some users, mostly outdoorsmen, but few pedestrians saw the need for a brick-size product that cost nearly $3,000 that would tell them what street they were on, along with their coordinates down to degree, minute, and second.

Automotive navigation seemed a wider application. Starting in the early 1990s, several automakers began offering GPS navigation systems but, with the higher resolution readings still unavailable then, positional accuracy wasn’t so good. And of course, the still-high cost of GPS technology meant that the units were typically available in luxury car models that sold in fewer numbers.

By 1998, GPS costs had dropped significantly, however, and Garmin was in as good a position as any company to capitalize. Founded in 1989 and originally known as ProNav, the company had experience building GPS-based directional systems for the U.S. Army. Garmin was able to produce a portable model, at a consumer-friendly price (roughly $400), that could be loaded with accurate digital street maps.

The StreetPilot, the company’s first product for the consumer market, was roughly 8 by 17 by 5.5 centimeters (or about 3 by 7 by 2 inches) and weighed just over a pound, including six AA batteries. It had a 240- by 160-pixel black-and-white LED screen (Garmin would release a model with a color screen the following year).

It had a 12 parallel-channel GPS receiver, and offered positional accuracy of no worse than 15 meters (49 feet), and as good as 1 to 5 meters (3 to 15 feet) with differential GPS, in which satellite signals are supplemented with a signal from a terrestrial, fixed-base station.

The StreetPilot came loaded with a map showing interstate, U.S., and state highways, plus rivers and lakes in the United States, Canada, and Mexico, and main arterial streets in major metropolitan areas. Users could get CD-ROMs with local map data, including surface streets and points of interest, such as gas stations and restaurants, and transfer the data to dedicated memory cartridges (8 or 16 megabytes) that plugged into the units. Users could enter a destination address and the StreetPilot would guide them along the most direct route. In short, the StreetPilot provided a stripped-down version, without the real-time traffic updates, of what you can get nowadays in a free smartphone app. Still, it was a revelation at the time.

Garmin and its competitors not only changed the way people drove, they came close to making map reading pointless for most people. And they might have saved a few marriages in the process.

Back to Consumer Electronics Hall of Fame >>